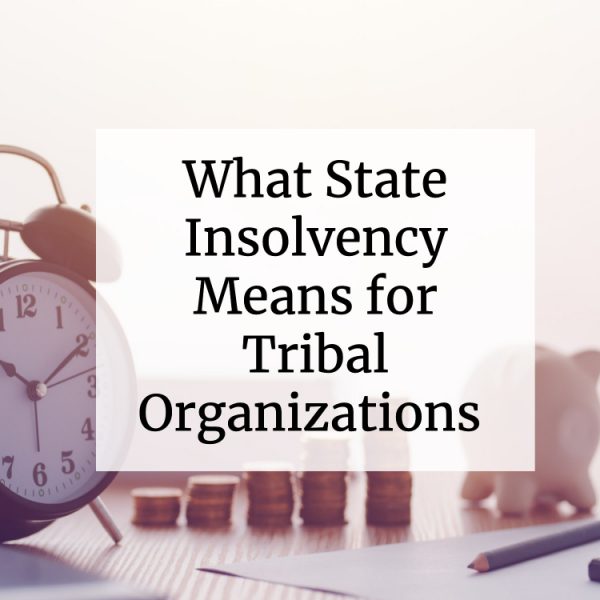 Across the nation, tribes are facing the brunt of the economic downturn as casinos, resorts, hotels, restaurants, and other businesses shut down during the pandemic. While state and local government tax revenues have lost on average 20% of their tax revenue during the stay-at-home orders, Indian Country’s revenue base has been essentially reduced to zero, according to the National Indian Gaming Association. To exacerbate the situation, it’s likely that employment taxes will reach an all-time high as states try to recover from insolvency. Tribal organizations must prepare now for what 2021 will bring.

What Happens When States Become Insolvent?

State insolvency means its liabilities exceed its assets, and they’re not liquid enough to allow payment of the debts as they accumulate. By law, 49 states must have a balanced budget and adjust spending or taxes to maintain that budget. Unlike personal finance, states cannot declare bankruptcy without a change in the law.

When states become insolvent, they need to acquire loans from the federal government to pay unemployment taxes and fund other programs. As of April 27, 2020, the Federal Reserve’s Municipal Liquidity Facility may lend up to $500 billion to state governments, but each state has limits as to what they can borrow.

The Potential for State Insolvency is Real

People are continuing to file unemployment claims as more businesses declare bankruptcy, are required to shut down or shift their business models to become less dependent on face-to-face interactions.  Many states estimate their tax revenues will decline by anywhere from 2% to 30%. This decrease is significantly higher than during the Great Recession of 2008.

During the Great Recession, 35 states experienced insolvency of unemployment trust funds. These states accumulated over $40 billion in debt so they could continue paying unemployed workers – a debt that took years to repay.

Although most states have a balanced budget requirement in their constitutions, that doesn’t mean they can’t take loans from the government. Recently, several states, including California, Connecticut, Illinois, Massachusetts, New York, and Texas, have notified the government that they may need to borrow billions to fund unemployment benefits. Many more states could also follow suit.

While the shortfalls won’t prevent unemployed workers from getting government aid, the federal loans could lead to higher taxes for organizations in future years to repay the debt. Those employers who are insured through the state must recognize that unemployment tax liabilities will rise significantly in 2021 and beyond. Some states are going to tax employers at the most extreme tier and add assessments – even if the employer did not have claims against them during the pandemic. The burden of helping the states become solvent will be passed along to every organization.

As you begin to prepare your 2021 budget, consider factoring in the maximum increase in employment taxes allowed by your state. Alternatively, consider planning to self-insure and stop paying the price for the state’s insolvency issues. You can transition from a tax-paying structure to self-insured with clear policies and procedures designed to eliminate unnecessary unemployment charges. You can also receive stop-loss protection in the event of a catastrophic unemployment season.

Although the health and financial costs of COVID-19 continue to be a concern, you can take steps to help regulate costs, generate plan savings, and secure the financial viability of your organization. By planning ahead and mitigating risks, you’ll ensure you don’t get stuck holding the bag for the state’s insolvency issues. Contact us to learn more about how we can help you transition to a self-insured organization.